As is my habit, I attended Health Extension #12 at the new Hacker Dojo in Mountain View this past week.   The new Hacker Dojo location seems bigger and more professional than their old place.  This hackerspace has a clean, organized air about it which reflects its location in Silicon Valley.  NoiseBridge in SF and SudoRoom in Oakland both seem more anarchistic.  I want to go back sometime and check it out more thoroughly though.  I love hackerspaces.  But one of the Hacker Dojo members was complaining to me about freeloaders.  So it seems that Hacker Dojo is subject to the same problems that plague all attempts at direct democracy. Saying that everyone is in charge is equivalent to saying no one is in charge.  The direct democracy folks will need to work a bit harder to outdo the framers of the Constitution.  Representative democracy, get into it. Joe Betts-LaCroix gave a summary of the Health Extension mission and an update on their current activities.  The bottom line is that aging research is seriously underfunded.  Health care costs consume 17% of US GDP, and up to 90% of that spending is on age-related diseases.  We simply can’t afford to continue ignoring the biochemical processes of aging.  We need to spend on effective preventative medicine.  He also reported that the Health Extension pipeline is operational.   So researchers with great aging research ideas that are vetted by the HE Scientific Advisory Board will get assistance with funding and support from a variety of potential sources such as venture capital or philanthropic funds.

Joe next trotted out a fancy new refactoring of the word “aging”:

Degenerative Precursors – Any process, condition, or diagnostic result that, if unchanged, correlates with a high probability of subsequently developing any of a list of at least two, otherwise disparate age-related diseases.

He ran this by a bunch of biologists and they came up with a big honking list of “degenerative precursor” candidates, so let’s see where they go with this.  The HE 2013 internship project already produced “the world’s first comprehensive database of all known genetic variations in humans that pertain to lifespan and aging characteristics.”  It’s available online now, and they have submitted the results to a prestigious journal for review.  So these people don’t mess around.  I’ve heard many researchers suggest that a vast store of answers lay undiscovered within the massive corpus of existing research.  Don Swanson pioneered this sort of literature-based discovery which I learned about at a Samuel Arbesman talk last year.    This sort of meta-study is probably going to be more and more important as the amount of research explodes.

This month’s Health Extension featured leading Alzheimer’s researcher J. Wesson Ashford, MD, PhD.  Dr. Ashford was instrumental in developing anticholinesterase therapy, which is now standard treatment for Alzheimer’s disease.  He is now the director of the War Related Illness and Injury Study Center the VA Palo Alto Health Care System, and clinical professor of psychiatry and behavioral sciences at Stanford University. He is chair of the Memory Screening Advisory Board of the Alzheimer’s Foundation of America and clinical editor of the Journal of Alzheimer’s disease.  So this guy knows his Alzheimer’s.

Ashford started out his talk by telling the crowd that we were all going to die, which wasn’t well received by a bunch of life extension enthusiasts.  However, he tried to put things into perspective by pointing out that the Milky Way and Andromeda galaxies are due to collide in about 4 billion years, which certainly makes me feel better about dying.

He went on to point out that one of Joe Betts-LaCroix’s standard slides showing age-related diseases would be more clear if plotted on a logarithmic scale.  He referred to the Gompertz Law of Mortality, which states that mortality increases exponentially over time starting around age 30. 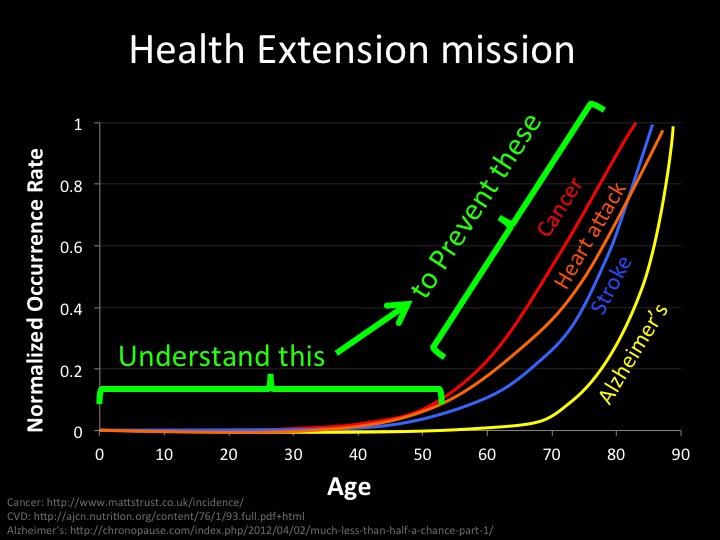 So the chart above would look like the chart below if mapped to  log scale, get it? Simply put, the older you get, the more likely you are to die.  And this is a regular progression, not a sudden jump as the first slide might make it seem.  Wesson seemed to be making a fatalist point: time kills – period.  But Health Extension might be able to use this point of view to tweak their message.  Folks ought to take aging more seriously if they consider that our risk of death is doubling every year over thirty.

Dr. Ashford pointed out that the exact cause of Alzheimer’s is still not known, but there are several schools of thought on the matter.  The Beta-Amyloid theory has been the prevalent theory for over 100 years and suggests that the plaques that build up in the brains of Alzheimer’s patients are the cause of the condition.  However, several drugs have successfully removed these plaques, but failed to improve the symptoms of Alzheimer’s disease.  So that has lead some, including Ashford, to conclude that this theory is flawed and that billions of dollars have been wasted by drug companies.  He made the reasonable point that the role of factors should be understood before attempts were made to remove them from the body.

The Tau theory is that a process called “Tau hyperphosphorylation” leads to tangles that clog up the neuron and prevent it from functioning.  This occurs in the later stages of Alzheimer’s disease and is related to dementia.  Ashford himself subscribes to a theory which I didn’t really understand.  But he seemed to suggest that attention should be focused on another protein that is created when beta-amyloids are cleaved from their precursor protein.  I couldn’t find the name of this creature, but I will ask around.  But it seems that Ashford thinks that the real action is happening inside the cell and the extracellular plaques are a red herring.

Dr. Ashford made some provocative comments that people don’t care about genetics, cost-benefit analysis, or the future.  His case for genetics centered around his assertion that not enough people are using 23andMe.  Also, he lamented that not enough of the papers being submitted to Journal of Alzheimer’s disease are controlling for the apoE gene, which has a major impact on Alzheimer’s risk.  This gene has three variations: APOE-2 reduces likelihood of Alzheimer’s, APOE-3 has average risk, and APOE-4 confers increased risk.  I checked my 23andMe report and was relieved to find an APOE-2 in there.  But of course, if I had an APOE-4 I wouldn’t… err, what was I saying?  Never mind.  Actually, I shouldn’t joke about this stuff.  Folks with a couple of APOE-4’s should consider taking extra preventative measures.

Here are the preventative tips I got from Dr. Ashford’s website:

It was also suggested that low doses of ibuprofen might be preventative of AD in a way similar to the way that people take small regular doses of asprin.

Ashford has developed a memory diagnostic tool at http://www.memtrax.com to help detect memory degradation associated with Alzheimer’s as early as possible.  I signed up and tried it out, and it involves viewing a series of pictures and hitting the space bar when a picture is repeated.  It was fairly easy and more of a test than a task, like Dual N-Back or Lumosity.com.  It seems to be free and it’s cool that Ashford is putting it out there to help folks out.  He also sees huge potential for big data and web applications to enable memory testing across broad populations.  This is the sort of area where Quantified Self type data can cross over into real science.

After the talk, I got into a discussion with a Silicon Valley entrepreneur type who was skeptical about Health Extension.  It’s illuminating to discuss your beliefs with a skeptic that doesn’t listen very closely.  All of the sloppiness and jargony shorthand which is acceptable when preaching to the choir gets called into question.

So why am I in favor of health extension after all?  I think the key lays in the distinction between life extension and health extension.  No one wants to live 50 additional years in the poor health of a typical 80 year old today.  The goal is to extend the period of health for humans.  That’s a big deal.  It would lead to a huge reduction in suffering worldwide, massive economic benefits for states burdened with high health costs, and it’s just what I want for myself and my own loved ones here and now.

Of course this skeptic brought up the standard Malthusian argument that the earth couldn’t sustain humans with extended health spans.  In response, I brought up the Haber process which is an example of how human ingenuity throws a wrench into Malthusian calculations.  The Haber process extracts nitrogen from the air in the form of ammonia.  Big deal, right?  Well fertilizer generated from ammonia produced by the Haber process is estimated to be responsible for sustaining one-third of the Earth’s population.  So when we consider the sustainability of life extension, we should consider what other breakthroughs like the Haber process lay around the corner.

The flip side of this argument is that a ballooning Haber enabled population is degrading the earth at a more rapid pace.  I might argue that folks who oppose health extension on sustainability grounds should consider that the poverty induced high reproductive rates of the developing world probably dwarf any environmental impact that health extension might have.  Arguments about the stagnation of innovation notwithstanding, I will assert that humans are inventive enough to increase efficiencies, and sensible enough to reign in fertility, as their conditions improve.  So let’s go help pull the Global South out of poverty so that their fertility rates go down to more manageable levels and work on health extension.

Another point that came up that evening was this common Silicon Valley refrain that startup founders need to stop focusing on minor first world problems and start tackling the real problems of the world.  At the same time we hear that VCs have turned cowardly and are now demanding that startups have an established customer base and revenue before they will dip a tremulous toe into the water and risk their precious cash.  So the problem is probably not founders without vision, as much as capital without guts.

Overall this was an interesting evening that touched on a range of topics.  Alzheimer’s disease is a serious illness that will probably increase in frequency as the population ages and lifespans continue their historical increase.  It may be that the big drug companies need to slow down and dig deeper into the fundamental biological processes underpinning this disease in order to come up with truly effective treatments.  I admire the work of researchers such as Dr. Ashford, who tirelessly probe into the maddening complexities of human biology looking for these answers.  Even if he is a fatalist who insists that we are all doomed to die in the nearing galactic traffic accident.